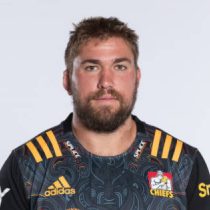 Ross is a former Chiefs development prop who now represents Bay of Plenty in the Mitre Cup.

Having shown his potential with the Chiefs development side Ross was named in the New Zealand squad to compete at the World Rugby Under-20 Championship in Italy in June 2015.

Ahead of the 2017 Super Rugby season Ross was called into the Chiefs squad for the first time.

Ross made his debut against the Western Force.

In April 2017, he was named in the Provincial Barbarians side to face the British & Irish Lions in their tour opener in Whangarei on June 3.

Ross made 5 appearances for the Chiefs in Super Rugby and faced the British & Irish with the Chiefs and with the Provincial Barbarians.

He was then named in the Chiefs 2018 Super Rugby squad.

He captained and lead Bay of Plenty to victory in the 2019 Mitre 10 Cup Championship final.

Ross, named for the Chiefs ahead of the 2020 Super Rugby season, had obtained 24 caps.

In July 2021, he was called into the All Blacks squad following injury to Karl Tu’inukuafe.