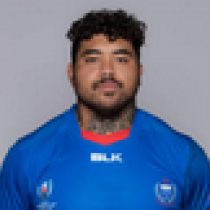 A hard-hitting, strong ball-carrying loose forward, Afa Amosa is what everything you'd expect a Samoan looseforward to be and some.

Amosa played his Junior rugby at Moorabbin and was Captain of the Moorabbin Colts team in 2007.

He then made the move to Canberra to play for Uni Norths and be a part of the Brumby Runners Academy. Whilst there he was picked as part of the Samoan U20 training squad.

He returned to Melbourne to be a part of the Rebels Rising programs in 2011 and he finished his rugby in Victoria as Captain of Harlequins 1st grade.

An unexpected route saw the Samoan head to Spain with Bizkaia Gernika RT, before he was picked up by then French Division 2 side Colomiers signing a 2-year deal with the side.

He drew the attention of La Rochelle scouts at Colomiers who eventually signed Amosa to a 3-year deal up to 2018.

Following the conclusion of the 2017/18 Top14 season, the versatile Samoan signed a deal to join Union Bordeaux Begles and was included in the Samoa Squad ahead of the 2019 Pacific Nations Cup where he made his debut in their opening win of the tournament against Tonga and went on to be selected for the RWC squad.