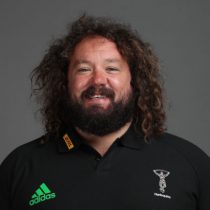 The shaggy haired prop has become synonymous with both Welsh and Ospreys rugby over the past decade. Since making his regional debut for the Ospreys in 2003, Jones’ has been thoroughly impressive and has earned the reputation as one of Europe’s foremost props.

Jones’ impressive form for the Ospreys would lead to international recognition for Wales, and, since his debut in 2003, Jones has earned eighty three caps and has been an integral part of three Welsh world cup squads as well being part of the 2009 British and Irish Lions tour of South Africa. In 2013 Jones was once again included in the British and Irish Lions squad to tour Australia. Jones may well be the first name Gatland writes down when he sits down to select his starting XV for the first test.

Jones has become one of the best tight-head scrummagers in world rugby and his injury 4 years ago was one of the turning points of the second test along with the departure of O'Driscoll. In 2013 the three-time Grand Slam winning prop emulated fellow three-time winners Gareth Edwards and JPR Williams in also winning a Lions test series, when he was part of the squad which defeated Australia.

Joining Harlequins after retiring from international rugby and making 22 appearances for the Club, Jones signed an undisclosed contract extension with the club, which included a dual role as a player.

Jones’ role changed as he took up a joint playing and coaching position, a year after joining Harlequins, going on to coach with the Club full-time after retiring from playing at the end of the 2017/18 season.

He was part of the Quins' coaching staff that won the Premiership in 2021. In February 2022, Jones extended a seven-year stay with the London side having arrived in 2015 as a player.