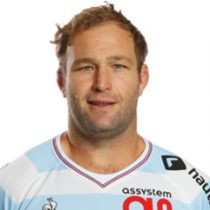 Although a South African national from Durban and the son of Springbok great Wynand Claassen, he is eligible to play for France and made his International debut against England after he showed a lot of promise with Castres while finishing runner-up in the Top 14 in 2012. He has represented France 6 times

He began his career with the Bulls in South Africa before making the move overseas to CA Brive in 2006 whom he represented over 120 times before leaving for Castres on a 2-year deal.