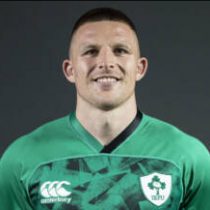 He featured for the Irish U20s for two seasons, in 2010/11 & 2009/10, playing in two 6 Nations tournaments and two Junior World Cups. Conway joined the Leinster Academy at the beginning of the 2009/10 season and signed his first professional contract in 2010 for Leinster.

He made his senior debut for Leinster in a Magners League fixture against Scarlets in 2010, coming on as a late substitution. The winger made the move to Munster from Leinster at the start of the 2013/14 season after signing a two-year contract.

He was included in the Emerging Ireland squad that traveled to Georgia for the Tbilisi Cup in June 2013 but picked up a calf injury while training and took no part in the competition. In March, he was added to the Ireland training squad for the final round of the 2016 RBS 6 Nations.

In January 2016, he signed a two-year contract extension that saw him remain with the province until June 2018. On 23 January 2017, Conway was named in the Ireland squad for the opening two rounds of the 2017 Six Nations Championship.

Four months later, he was named in the Ireland squad to tour USA & Japan, and pushed on since making his Ireland debut in the win over England in the Six Nations. In February 2018, Conway signed a new two-year deal with Munster that would see him remain in red until at least June 2020.

With blistering pace and versatility, Conway was selected in the 31-man Ireland squad for the 2019 Rugby World Cup before being named for the 2020 Six Nations.