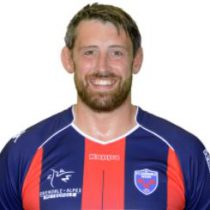 Muldowney was late to get into rugby, at first opting to play basketball and football instead. His first club was Stourbridge RFC playing in the National League 1.

From there he was signed by RFU Championship side Moseley. Following his spell at Moseley he was scouted by Scottish club Glasgow Warriors. Aly left Glasgow a year later citing lack of game time as his reason for leaving to join Exeter. He was named in the Scotland A Squad for the 2011 Six Nations but never made it onto the field for the men and blue.

He is also qualified to play for Ireland as his father is Irish born. In January 2013 it was announced that Aly would be joining Connacht. He made 16 appearances for the Irish province in his debut campaign.

By the middle of the 2015/2016 season he had amassed 65 appearances for the side before announcing his move to French club Grenoble at the start of the 2016/2017 season on a two year contract.

In January 2018 Bristol confirmed that Aly would join the club ahead of the 2018/19 season.

In July 2020, Mudlowney brought his playing career to an end making a retirement call.