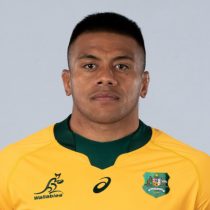 Born in Sydney, Allan is son to former Samoan intentional Vili Alaalatoa. He played 1st team rugby at Newington College for three years and represented Australia on several occasions as a Schoolboy and Junior Wallaby including 3 consecutive IRB Junior World Championships in 2012, 2013 and 2014.

His set-piece quality is undoubted and, coupled with his ability to carry in the loose, plus his sheer physicality at the breakdown and in the tackle, the Newington College graduate has been making waves since his Super Rugby debut against the Chiefs in Canberra in 2014.

Alaalatoa made his debut for the Brumbies in 2014 against Chiefs in the Super Rugby play-offs and in 2015, Brumbies teammates celebrated wildly when he crossed for his very first Super Rugby try against the Force.

Allan and his brother Mike became the first siblings to play against each other for Super Rugby teams from different sides of the Tasman with his brother turning out for the Crusaders and going on to play for Samoa.

Alaalatoa has since become a vital cog of the Wallabies pack since making his test debut against New Zealand in 2016 when he came off the bench for Sekope Kepu in Sydney.

In 2018, Alaalatoa committed his future to the Brumbies, signing a five-year contract extension until the end of 2023.

A childhood friend of Scott Sio, the pair have dominated the front row for the Brumbies and Australia with pair both making the 2019 Rugby World Cup squad.

Alaalatoa took his test cap tally for the Wallabies to 37 during the Rugby World Cup and capped off an outstanding 2019 season by being recognised by his peers around the country, becoming the first prop to win the Brett Robinson Award as the Brumbies’ Players’ Player, as well as the RUPA (Rugby Union Players’ Association) Medal of Excellence.

Ahead of the 2020 Super Rugby season, Alaalatoa was named as the Brumbies new captain and entered the new season with 75 Super Rugby caps.

One again Alaalatoa was named in the Wallabies squad for the 2020 season.

In October 2020, the Brumbies skipper was honoured with his second consecutive Brett Robinson Award for Players' Player of the Year after a stellar 2020 season.

He becomes just the second player in the club's history to win the top award in successive seasons joining 10-time winner George Smith.