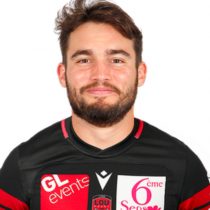 Born 9 September 1987 in Montauban, Alexis Palisson is a french wing/fullback who started his professional career at Brive in 2005.

He made his international debuted against Australia in 2008 when an under strengthed French side toured Australia and the Pacific Islands,

Ahead of the 2011/12 season Palisson left Brive and joined Toulon.

He was included in the France 2011 Six Nations squad and started 2 of his sides 5 matches.

The winger was included the 2011 France Rugby World Cup squad and started four matches for Les Bleus during the tournament, including the final against New Zealand.

At Toulon, Palisson was able to win the Top 14 and Champions Cup with Toulon. Ahead of the 2013/14 season, he signed for Toulouse, leaving Toulon having made over 50 appearances for the French club.