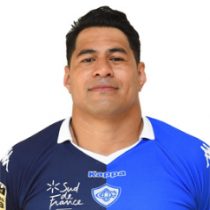 He was quickly identified as an up-and-coming young player with tremendous strength, ball skills and speed.

Tulou started his provincial career with the Wellington in the 2006 NPC before joining Taranaki in 2008 and was named in the Hurricanes Super 14 squad.

In 2008 Tulou represented the New Zealand 7s against Tunisia.

In 2011 he signed for Montpellier. During the 2011/12 season, Tulou established himself as a first-team regular for Montpellier, featuring in 24 league games.

In September 2012 it was announced that Tulou had signed a new contract to keep him at Montpellier until 2015. He went on to make 88 appearances for Montpellier before signing for Castres ahead of the 2015/16 season.

He became a mainstay in the Castres' starting XV before his contract expired in 2020 on which he signed a season long deal with Lyon.