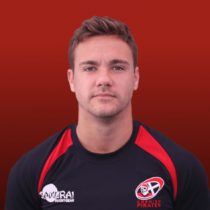 Schwarz played his early rugby at Mold Rugby Club and then represented RGC from under 12s to under 18s. He has represented Wales U18s, winning caps against France, Scotland and Japan, and has also in the past played for Italian side Rugby Colorno.

In May 2018, Schwarz signed a one-year deal with Cornish Pirates, joining from RGC - Rygbi Gogledd Cymru – who play in Wales’ Principality Premiership.

In January 2019, he signed a new two-year deal with Cornish Pirates.