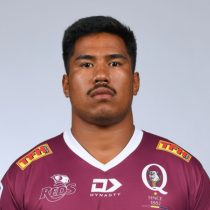 Mafi represented the St. Joseph’s Nudgee College First XV for three years before signing with the Reds as an 18-year-old.

In 2016, he was a key member of Queensland’s Under 20s side which claimed the inaugural Super U20s Championship undefeated.

He was then included in the Reds squad for the 2017 Super Rugby season. Mafi made 22 appearances over his first two seasons with the Reds in 2017 & 2018 season.

He signed for NTT Shining Arcs for the 2018/19 Top league season.

In September 2018, Mafi signed an extension with the Reds for the 2019 Super Rugby season.

He wrestled the number two jersey off Brandon Paenga-Amosa after starting at hooker in 11 of 16 matches in 2019.

Mafi enters his fourth Super Rugby season at the St.George Queensland Reds in 2020.