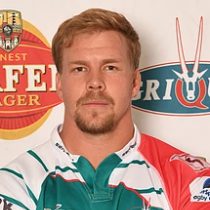 After school, the tough hooker signed for the Blue Bulls and represented the U19 Blue Bulls side while attending the University of Pretoria.

Le Roux made appearances in the Varsity Cup for Tuks.

In 2011 he moved to Johannesburg and linked up the Golden Lions.

Later that year he joined the Griffons on a permanent basis. He went returned to the Cheetahs for a short loan stint before he signed for the Griquas in 2015.