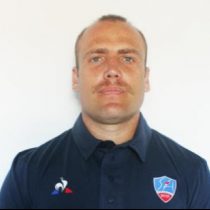 Playing his high school rugby at Grey College in Bloemfontein, Coertzen was selected in the Free State squad that played at the Under-16 Grant Khomo Week tournament in 2006.

He made his first class debut in the 2011 Vodacom Cup against the Leopards. He then spent 3 years playing club and Varsity Cup rugby with the UFS Shimlas.

In August 2014, he was a surprise inclusion for the Free State Cheetahs in their opening match of the 2014 Currie Cup Premier Division season against the Pumas.

After spending the 2015 Currie Cup qualification series on loan at Kimberley-based side Griquas – making six appearances – he signed for them on a permanent basis for the 2016 season.

In May 2018, Coertzen signed a two-year deal with Prod D2 side Aurillac.