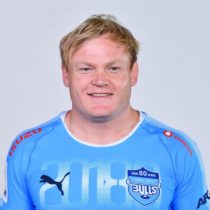 The former Cheetahs skipper has been a consistent performer at franchise level for a few years, but has had to stand patiently in the Bok queue behind his schoolboy mate Bismarck du Plessis.

He has since made the move to the Bulls where has made the number two jersey his own. The all-action hooker is renowned as a destructive ball-carrier who gets through plenty of work in the tight phases as well, and has shown great leadership potential, taking on the vice-captaincy shortly after his debut.

He has failed to stamp his authority over the number two jersey when given the opportunity and has thus found himself mostly playing off the bench for the previous 4 years.

Despite this, he is still providing stiff competition and was part of the Springboks 2015 RWC challenge.

In 2016, under new coach Allister Coetzee, Strauss was named the Springbok Captain for the Ireland series. Strauss continued to captain the national side for the remainder of the 2017 International season and announced that he would retire from test rugby at the end of the year.

The 66 test cap former Springbok captained the Bulls in 2017 but took himself out of the running for captain in 2018.

Strauss went onto make his 150th Super Rugby appearance taking his tally to 156, in doing so becoming the most capped South African in Super Rugby, before announcing his retirement.