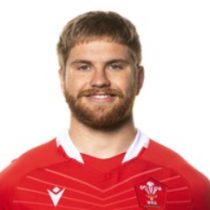 A talented athlete who could have pursued a career in football, Aaron Wainwright was a talented football player that got picked up by Cardiff City's Academy while only starting rugby at the age of 17.

Wainwright played U16s football for Cardiff City and revealed that he moulded his game around Patrick Vieira and Claude Makélélé.

Wainwright turned his attentions to rugby joining his local team Whiteheads RFC and has shown similar attributes to that of Vieira and Makélélé by darting up and down a rugby pitch rather than a football one and exceptional defensive element to his game.

With a massive engine and work rate, Wainwright captained the rugby team at Bassaleg High School and joined Cardiff Met University Rugby team and was looking forward to playing in the Principality Premiership with Newport RFC, however this changed when was called into the Dragons senior squad.

From there, he joined a rapid rise to the pinnacle of rugby as he represented his country at the Rugby World Cup less than 18 months after signing a senior contract with the Dragons in March 2018. After signing in March, Wainwright was called up to the Welsh' test squad by Warren Gatland and made his test debut off the bench against Argentina in June.

In 2019, Wainwright featured in every single game of Wales' Grand Slam victory in the Six Nations and was named in Wales' Rugby World Cup squad in Japan. At the World Cup, Wainwright won rave reviews for his tireless work rate as he played in all but one of Wales' games at the tournament, the third-place playoff.

Tipped by his former test coach to make the British and Irish Lions, Wainwright already has 21 test caps (as of June 2020).

In March 2021, Wainwright committed his long term future to the Dragons after over 50 appearances for the side.