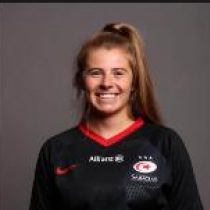 As an impressionable youngster, Zoe watched her dad and brothers playing at Tring and from then on, felt destined to follow in their footsteps.

And so it unfolded, with Zoe taking up rugby, just like her father John, who formerly represented Wales Schools, and brothers Alex and Eddie, the former of whom spent time with Wasps and featured for their A League side.

Zoe eventually moved to Welwyn, where she featured at U15 and U18 level, while also playing sevens – she helped England win the U18 European Championships.

The running fly half was drafted into the England Women talent development group at the age of 14 and she made the step up to senior rugby in the 2016-17 season with Saracens, where she was then named players’ player of the year.

She started both the 2018 and 2019 Tyrrells Premier 15s finals for Saracens at fly half, scoring two tries in the 2019 final in an 18-point haul to help the club to back-to-back titles.

Her first senior England bow arrived during the 2017 Old Mutual Wealth Series against Canada where she made three appearances as a replacement and kicked her first points from the tee as the Red Roses completed a 3-0 whitewash.

She was awarded a full-time England contract in January 2019 and featured in all five games of the Women’ Six Nations later that year, starting the final three games as the Red Roses won the Grand Slam.

She took her cap tally to 14 by the end of the Six Nations.