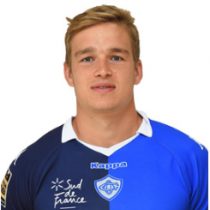 Yohan is an effective goal kicker and is not satisfied with sub standard kicking performances. His former club, Biarritz Olympique, benefited from his 70 appearances, where he scored 169 points before accepting a deal at Castres in 2017.

Le Bourhis was somewhat less successful at Castres making 7 appearances in the TOP14 and departed the club signing for Oyonnax at the end of the 2018/19 season.