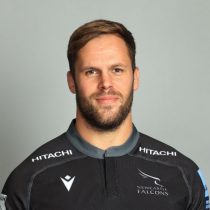 Beginning his rugby with Northern RFC at junior level, Welch joined the Falcons Academy fresh from his time at Newcastle’s Royal Grammar School, from where he made his senior Falcons debut as a 17-year-old in an Anglo-Welsh Cup game at Newport Gwent Dragons.

After spending time with local club Blaydon and representing England at Under 18s, 19s and 20s level, Welch signed full professional terms with Newcastle Falcons in 2009 and has become a mainstay of the forward pack.

Back-row forward Will Welch became the Falcons youngest ever club captain in 2012 when, at the age of 22, he took on the leadership role.

Skippering the side to the Championship title in his first season he has since led them in the Premiership, where his tireless work ethic and relentless tackling have marked him as a stand-out performer.

He has captained the side since coming back into the top flight for the 2013/14 season and has extended his contract until the end of the 2017 season.

In July 2016, Welch committed himself to Newcastle Falcons, signing a four-year deal that will keep him until the 2019-20 season.