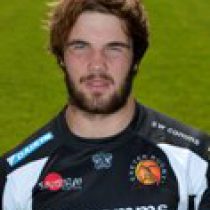 Born in Wandsworth, England, Carrick-Smith attended Blundell's School and has gone on to represent Exeter Chiefs in the English Premiership. At 6'11", Carrick-Smith is the tallest ever professional player to play in England. His debut for Exeter came in the second row November 2012 against London Welsh. The giant lock forward has also spent time on loan with Randwick in Australia.

The Bedford Blues signed this gaint of a lock at the start of the 2016/17 season and will surely benefit from his skill set.