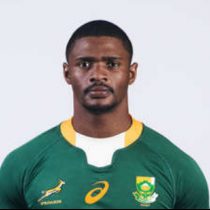 Gifted with the ball in hand Warrick Wayne Gelant attended Outeniqua High in George and represented SWD at the 2013 Craven Week. His performances at the competition led to him being named in the SA Schools side that year.

Gelant had a big year in 2014 after representing Tuks in the Varsity Cup and the Bulls in the Vodacom Cup and he was named in the SA U20s squad that competed in the Junior World Championship in New Zealand where South Africa finished runners-up to England. After the tournament, he was included in the South African Sevens squad winning both of the tournaments he appeared in.

He was named in the Bulls 2015 Super Rugby squad, later that year and was included in the SA U20s squad that competed at the World Rugby Under 20 Championship in Italy. Gelant featured more regularly for the Bulls during the 2016 Super Rugby season and was one of the stars of the 2016 Currie Cup.

He carried his form into 2017 and was named in the wider Springboks squad for the 2017 June internationals. He did not make the squad but was selected in the South Africa A squad to face the French Barbarians. Gelant top scored with 10 tries in the 2017 Currie Cup squad and earned his call-up to the Springbok squad for the November Tests against Ireland, France and Italy

In November 2017, Gelant was named Currie Cup Back of the Year at the Blue Bulls awards ceremony. The electric fullback came off the bench for his test debut against Italy before starting his test against Wales where he scored his first test try.

The young utility back featured in all four of the Springboks June tests and missed just one of the Bulls' 16 Super Rugby matches in 2018 before an injury ruled him out of the Rugby Championship. In August 2018, he extended his contract with the Blue Bulls until 2020.

Gelant heads into the 2019 Super Rugby season with 32 caps (and 5 test caps) in the competition and will look to push for a place in the Springboks squad after missing the tail end of the season through injury.

Continued good form with the Bulls earned Gelant a place in the Springboks' World Cup squad and scored two tries for the side on their way to lifting the William Webb Ellis Cup.

He took his test cap tally to 9 in doing so and started the 2020 Super Rugby season with the Bulls, who left in May to join the Stormers.