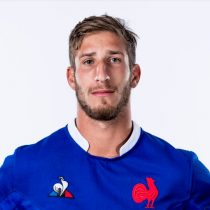 Rattez grew up playing with Racing 92 in the French capital before joining Narbonne for three seasons in the Pro D2, Vincent was one of the most technically gifted players in the league. His versatility means he can slot into any position in the back-three.

In 2016, his performances caught the eye of La Rochelle who snapped up the promising talent to join their ranks. Rattez saw an increase in game time in the Top 14 during the 2016/17 season, playing 23 times for the regular season table-toppers, before losing to Toulon in the semi-final of the TOP14.

He scored five tries in his debut season with La Rochelle and was included in the France squad for their three-Test summer tour to South Africa in the summer of 2017.

Rattez made his France debut in the second Test in Durban playing ten minutes. He continued to put in outstanding performances for La Rochelle and was the third most used player during the 2017/18 season.

He was called up to the France World Cup squad after missing out on the squad initially and replaced the injured Thomas Ramos.

He featured off the bench against Wales in Oita taking his test cap tally to three. By 15 January 2020, had 95 caps for La Rochelle, 86 in the starting line up scoring 26 tries.

In mid 2020, he joined the MHR on a three-season contract.