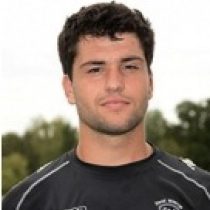 Combative flanker Vincent Farre started his career in French rugby with Mont-de-Marsan, the club he spent four years with between 2012 and 2016.
Ahead of the 2016/17 season, he joined Albi and quickly become a regular in the starting 23.
A stellar season with Albi saw him sign a deal with Agen who have been promoted to the Top14 for 2017/18 season.