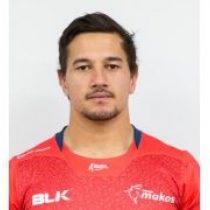 Joass started playing for Wanderers in Nelson's club rugby competition for many years before eventually earning a place in the Tasman Makos, having now represented his province for two seasons in the Mitre 10 Cup.

Days before the division one club final, Joass had an "intense cramp" in his heart and was notified by a cardiologist that he would risk his life if he continued to play sport.

Against all odds, Joass overcame the obstacle and got back to the field, eventually becoming one of three Tasman players selected in the All Blacks Sevens squad for the Wellington 7s tournament.

Joass helped New Zealand win both the Gold Medal a the Common Wealth Games and the Rugby World Cup Sevens.

He will represent Bay of Plenty Steamers in the 2018 Mitre 10 Cup.