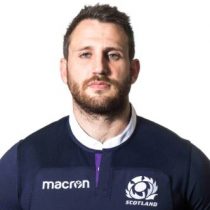 The former Ulster winger joined Glasgow in 2011. The physical winger was eligible for the land of his birth, America, Ireland, where he spent many years in Ulster’s academy, or the nation of his mothers birth, Scotland. Seymour chose Scotland and was duly selected for their 2012 Autumn International campaign.

The Glasgow Warriors winger became a certainty on the wing for Scotland under coach Vern Cotter.

He made his test debut in summer 2013 in South Africa. One of only five players ever to score tries in 5 successive tests for Scotland including all four in the RWC 2015. He also started both tests on the summer tour to Japan and two autumn internationals, scoring a try against Georgia in the last match.

In January 2017, he was included in Scotland's squad to compete in the 2017 Six Nations tournament, having previously played 12 Six Nations matches and scored 3 tries.

In April of that year, he was only one of 2 Scottish players included in the British and Irish Lions tour to NZ, in what was his first tour. At his time of selection, Seymour had made 36 Scottish caps.

He retired as Scotland's fourth-top try-scorer having crossed the paint 20 times in his 55 appearances in a six-year spell, which has taken in two Rugby World Cups (2015 and 2019) and the drawn 2017 Lions tour to New Zealand.