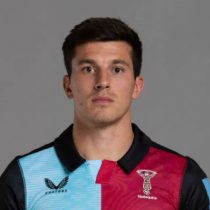 Allan has made quite an impression on top-flight rugby in just a few short years. Born in Vicenza, Italy to a Scottish father, rugby was always in his blood as he grew up watching his uncle John win 9 caps for Scotland and a further 13 for his native South Africa.

It was in South Africa where Tommaso was to make his first real impression on the rugby world, starring for the Western Province U19 side in their U19 Currie cup victory over the Blue Bulls. From there he moved to Perpignan, where in 2013 he finally broke through the ranks to the senior team, making his debut against Racing Metro.

An imposing presence at 10, with an eye for a gap to boot, Allan is already making a name for himself as one of the most exciting young backs in the game. Having represented Scotland at all underage levels, he decided to declare for his country of birth, Italy, and made his international debut against Wales in the 2014 Six Nations.

Allan was in fine form for Benetton Treviso during the 2017/18 season and was named in Italy's 6 Nations squad. He went into the competition having already earned 33 Test caps for his country.

He was again named for the 2019 6 Nations squad having 18 previous 6 Nations appearances and scoring 97 points.

As of December 2019, he has made 47 appearances for Benetton and has scored 284 points.

Following 66 appearances for the Italian side, Harlequins announced that the Italian international fly-half will join the Club ahead of the 2021/22 season.