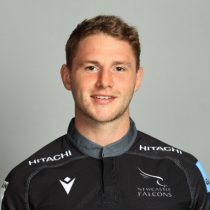 Versatile back Penny started playing rugby aged four at Alnwick RFC, a club he represented up to the age of 16 along with his school rugby at RGS Newcastle.

The North East native joined the Falcons’ junior academy at the age of 11, playing for England Under-18s Clubs & Schools.

Making his first team debut in the 2013/14 LV= Cup, Penny’s first Aviva Premiership call-up came off the bench in December 2014 at home to Saracens.

Able to operate at wing, centre or full-back, Penny scored his first Premiership try away to Northampton in the second week of the 2015-16 season, playing a total of six league games and the three European matches.

A broken arm and then a serious knee ligament injury restricted him to just a single senior appearance during 2016-17.

Penny joined Harlequins in 2019 and made his debut for the Quins in the Champions Cup clash against Clermont where he was named in the starting XV.

In August 2020, he signed a new two-year deal with Newcastle Falcons. Returning to the Falcons in the summer of 2021, his transition from centre to full-back worked wonders as he scored three tries in 15 appearances.