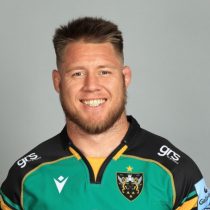 Harrison was scouted by Dylan Hartley when the England hooker visited his old school in Rotorua during the 2011 Rugby World Cup in New Zealand – and the rest, as they say, is history. The New-Zealand born flanker graduated at Rotorua Boys School, the same school attended by both Liam Messam and Dylan Hartley.

Known for his tenacity at the breakdown and pace in the loose, Harrison is a back row forward with all the qualities to make it in the professional game. He first joined Saints as a member of the Senior Academy in late 2011, before making the transition into the first team in 2012 – his debut for the first team came against Wasps later that year.

The 2015/16 season stands as a highlight as his consistently superb performances also earned him a call up to Eddie Jones’ squad for England’s summer tour to Australia.

Eddie Jones offered him a route back into international rugby less than a month after axing the back-row forward from his squad, he was originally omitted from the 45-strong elite player squad named less than four weeks before the first November International.

Harrison was also a part of the England squad for the 2017 Six Nations and helped his adopted country become champions for the second year running.

In September 2019, he was named co-captain of the Saints squad for the 2019/20 season along side Alex Waller and he heads into the new season just shy of 100 test matches.