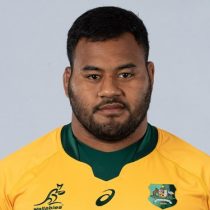 Tupou became an internet sensation after scoring 3 tries against Kelston Boys High and was nicknamed the 'Tongan Thor'. He is extremely quick and agile for a front ranker.

The Tongan youngster had interest from the NZRU, 5 French Clubs and an English Club but opted to sign for Queensland where he plays NRC and was part of the Super Rugby Squad.

He has expressed a desire to play for Australia which influenced his decision.

The Tongan Thor missed only one of the Reds 15 Super Rugby matches in 2017 and continued to his fine form for Queensland later that year.

In November he was called into the Wallabies squad and made his Test debut against Scotland at Murrayfield on 24 November 2017, days after becoming eligible to represent the side.

He was included in the Wallabies squad for the 2018 June Tests after another strong start to the 2018 Super Rugby season.

Tupou featured in all but one of the Wallabies Super Rugby matches and entered the 2018 Rugby Championship with 4 test caps.

In August 2019, he signed a four-year contract extension with Rugby Australia and the Reds.

Leading into the World Cup the Tongan-born prop had won 15 caps for Australia since making his debut against Scotland in 2017.

In September 2020, Tupou claimed his maiden Pilecki Medal after being voted by his teammates as the Queensland Reds best player in 2020.