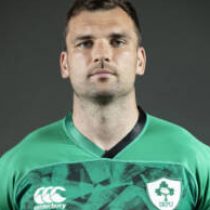 A product of the talent factory that is the Leinster Academy, Beirne made his senior debut for Leinster from the bench against the Cardiff Blues in 2015.

A versatile player, his ability is highlighted by the fact that he can play anywhere in the back row as well as the second row. He made nine appearances for the Ireland U20 team and was part of the team which finished 6th in the 2012 IRB Junior World Championship.

Stiff competition in the back five at Leinster meant that Beirne made a total of four appearances for the senior side, playing twice against Dragons and once against Scarlets, a team he would later go on to represent. All of these appearances came off the bench.

Beirne spent most of his career at Leinster playing for their A team and he earned 10 caps for them, making 9 appearances in the British and Irish Cup before he was released by the Irish Province. It was announced on 28 June 2016 that Beirne had moved to Scarlets and he made his debut for the side off the bench in the opening game of the season - a loss against Munster.

Despite the loss in his opening game Beirne would go on to become a pivotal player for the Welsh region, enjoying a breakthrough 2016/17 season with an outstanding performance in the Welsh side’s Guinness PRO12 title win in May and helped Scarlets to the PRO14 final a season later.

Beirne's form with Scarlets prompted Munster to recruit Beirne with the versatile forward signing a two-year contract with the club. In his final season with the side Beirne was named as the Players' Player of the Season. He made his Munster debut on 7 September 2018, coming on as a replacement against Glasgow Warriors. He was also named in the 2018/19 Pro14 Dream Team.

During his first season back in Ireland, Beirne was named in Ireland's squad to tour Australia and made his debut in the second test. His impact at Munster saw Beirne sign a two-year contract extension that will see him remain with the province until June 2022.

He was also included in the Ireland Rugby World Cup squad that travelled to Japan in 2019 and featured in five games.