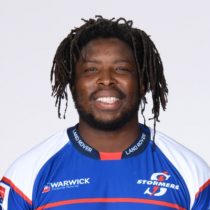 Another rugby gem from King Edward VII School, Ntubeni represented the Lions at U18 and the South African Schools team in 2009 before heading to the Western Province Rugby Academy.

WPU21, Vodacom Cup, Super Rugby and Currie Cup all followed in 2011. 2012 saw Siya securing the Currie Cup with WP and another great season in 2013 saw his inclusion in the Springbok Tour to Europe.

A couple of seasons with a few injuries stalled his career slightly but 2016 see's him back fit for the Stormers Super Rugby campaign.

Scarra failed to make a Super Rugby appearance in 2017 due to injuries but returned to help Western Province win the Currie Cup and was included in the 2018 Super Rugby squad.

In August 2019, he was called into the Springboks squad ahead of their International Friendly clash against Argentina.