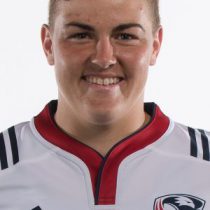 Sara Parsons made her USA Rugby debut in 2015 when she earned her first international cap at the Women’s Rugby Super Series where she helped lead the Eagles to a third-place finish behind England (2nd) and New Zealand (1st). A multi-sport athlete, Parsons played soccer, volleyball, basketball and golf through high school, competing with the University of Nevada, Reno’s Division I softball program before choosing rugby during her Senior year.

Since taking on the sport and becoming an Eagle, Parsons has spent her post-collegiate career with the Austin Valkyries, Scion Rugby Academy and Northern Virginia Women’s Rugby Club (NOVA). In addition to her tenure with 15s, the flanker is also an accomplished 7s player, earning a National Championship in 2016 with DC Scion Sirens 7s Club.

In 2017, Parsons’ rise in the rugby world saw her selected for the 2017 USA Women’s World Cup Pool where she earned a “Player of the Match” honor for her efforts during the Women’s Eagles’ 24-12 victory over Italy, helping her squad advance to the Semifinals. Just prior to the World Cup, Parsons joined Head Coach Richie Walker and the Women’s Eagles Sevens at Clermont-Ferrand Sevens, the last leg of the 2016-17 HSBC World Sevens Series where USA finished a record 6th place.