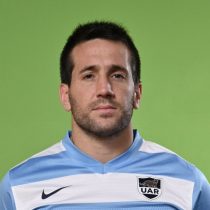 The Argentinian fly-half was born in Buenos Aires and has represented Asociación Alumni. He was also a member of Pampas XV.

Iglesias made his debut in 2009 against Chile in an emphatic win while representing Pampas XV.

He was a member of the Argentina national team that played at the 2015 Rugby World Cup.

He joined up with the Jaguares for the 2016 Super Rugby playing 12 times & continued for the following season lining out on 8 occasions.

Iglesias was included in the Pumas squad for the 2017 Rugby Championship, making 35 appearances for the Pumas ahead of their November test against Ireland.

The experienced flyhalf helped the Jaguares reach the Super Rugby Final while also taking his cap tally 41 by the end of 2019 despite missing out on the World Cup squad.

In December, it was confirmed that González Iglesias would join Munakata Sanix Blues in 2020.