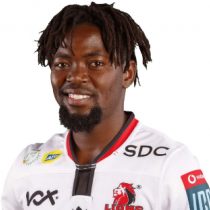 A fiery scrumhalf who was educated at Durban High School, Sanele Nohamba's schoolboy performances caught the eye and saw him represent the Sharks at Craven Week.

In 2019, he was selected for the South Africa Under-20s squad for the 2019 World Rugby Under 20 Championship. He scored 33 points at the tournament scoring two tries, seven conversions and three penalties.

He made his Currie Cup debut for the Sharks in July 2019, coming on as a replacement scrum-half in their opening match of the 2019 season against Griquas.

He cracked the nod for the 2020 Sharks' Super Rugby squad and played five of the matches before the tournament was abandoned.

He made five further appearances in the Super Rugby Unlocked tournament.

June 2021 saw him being named in South Africa's 46-man squad for the British and Irish Lions Tour. He didn't not make his debut for the Springboks during the tour but did play for the South African A side against the Bulls.

In May 2022, Nohamba left the Sharks having made 25 Currie Cup appearances. He also made 18 appearances across the URC and Super Rugby competitions.

He signed for the Lions and made his debut for the Johannesburg outfit in Currie Cup clash against the Cheetahs.