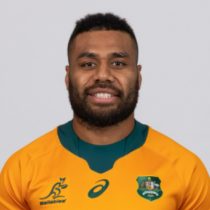 Kerevi’s father, Nimilote Kerevi was a Fiji international soccer star and his brother Joshua was also a talented Rugby player, playing alongside Samu in the Fiji U20s side for the 2012 World Rugby U20s Championship.

He represented Brisbane State High School in the Australian Schools Rugby Championship before playing 5 games for the Fiji U20 side alongside his brother. Although Kerevi is largely built he is extremely mobile and is a massive asset for the Reds at inside centre.

He announced a further two-year deal with the Reds in May 20th 2016 and was included in the Wallaby squad for the June Tests against England where he made his debut in the 1st game.

After making his debut against England in the 2016 June series, Kerevi made an impact with Australia scoring 3 tries in his first 8 Test matches and was included in Nick Stiles 2017 Super Rugby Reds Super Rugby squad.

Kerevi is comfortable at both inside and outside centre and was one of the top performers in 2017 and will look to continued that form in 2018.

The Reds centre started all three of the Wallabies' test against Ireland. He suffered a season-ending injury following the June Tests.

In July he was named as the Reds Player's Player of the Season.

In September Kerevi re-signed with the Reds and Wallabies until the end of 2019.

Kerevi completed the 2019 Super Rugby season with 72 Super Rugby caps and 26 tries before confirming that he will be joining Top League side Suntory Sungoliath.

The hardball carrying centre went to the World Cup in Japan as the Wallabies vice-captain and took his cap tally to 33, scoring 6 tries by the end of the tournament.