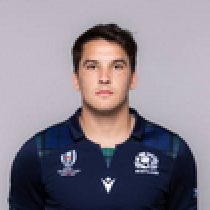 Sam played Rugby League for the Gold Coast Titans U20s after school, before returning to Rugby Union at the end of 2013, when he joined the Queensland Reds wider training squad and returned to his former club GPS.

He went on to make two Super Rugby appearances for the Reds and was been named on the bench a further three times.

Johnson signed for Glasgow Warriors ahead of the 2015/16 season, with the Australian joining from Queensland Reds.

The Australian centre was jointly voted as Player's Player of the Season at the 2017/18 awards dinner, having impressed with a string of consistently high-quality performances in the Warriors midfield.

In October 2018, Johnson was named as one of three uncapped players in Scotland's squad for the November Internationals where he did not make his debut. In January 2019 he was named in the 6 Nations Squad.

Johnson made test debut during the 2019 Six Nations and impressed throughout the competition, scoring in his second test against Ireland and another in the thrilling 38-38 draw against England.

His performances for Scotland and Glasgow saw him being included in the extended training squad for the Rugby World Cup.

He signed a new deal with Glasgow that will keep him at Scotstoun until at least May 2021.

Johnson was included in Scotland's squad for the 2020 Six Nations tournament.

In January 2021, he signed a contract extension with Glasgow Warriors having made 67 appearances for the club in a spell that includes two Champions Cup quarter-final appearances and a run to the 2019 PRO14 Final at Celtic Park.