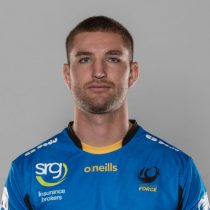 Joining the team in 2016 as part of the supplementary squad, McCauley has been handed a promotion to the extended playing squad for 2017. He spent most of last year representing NSW at the Under 20s level before being called up to the Australian Under 20s. His campaign earned him the inaugural David Dennis NSW Under 20s Player of the Year at the NSW Waratahs’ annual awards ceremony.

McCauley was also part of the NSW Schools winning side and the Australian Schoolboys in 2015. Born and bred in NSW, McCauley was schooled at Eastwood Public and Scots, representing the Coogee Juniors and Eastern Suburbs as well as the GPS 1st XV. After being named on the Waratahs bench against the Jaguars at home in round 16, Ryan made his Super Rugby debut against the Force one week later in the final game of 2017.

McCauley cemented his place in the Waratahs' squad as a full time member and played 4 games between 2017 and 2019 before breaking into the matchday squad in 2020 featuring in 5 of the opening six games before the 2020 Super Rugby season was brought to a halt.