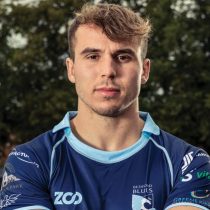 Born in Hertfordshire and a product of Wisbech Grammar School, Ryan Hutler joined the Bedford Blues in 2017 and while on loan in 2017/18 he helped Bishop’s Stortford win promotion to National 1.

Hutler is another success story of the Blues Academy having signed his first contract with the club. After bursting onto the scene with an impressive hat-trick in the 2017 Mobbs Memorial game, Hutler continued his development with Bishop’s Stortford in National 2 (South) helping them to promotion to National One.

He featured in the three pre-season friendlies against Plymouth, Saracens and Blackheath as well as making further five first-team appearances for the Blues.

In May 2018, Hutler signed a deal to remain at Bedford Blues for the 2018/19 Championship season.

The 2019/20 season saw Hutler become of the Greene King IPA Championship top try-scorers in the abbreviated season, with nine league scores to his name.

Following the abandonment of the season, Hutler signed for the Jersey Reds.