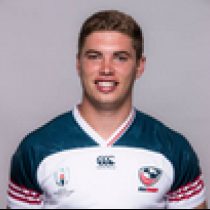 De Haas joined the Cheetah Academy in 2017 and represented the Free State Cheetahs in the U19 competition.

He played for CUT in the Varsity Cup in early 2018 and also for the Free State XV in the SuperSport Rugby Challenge before being called up by the Eagles coach, Gary Gold to a 31-man training squad for the June Test series.

In May 2018, the promising young scrumhalf signed with the Cheetahs until end of October 2020 and continued to build on his Eagles career after being selected for the 2019 Pacific Nations Cup Squad where he started the tournament with 11 international appearances.

In April 2020 his extended his stay at Cheetahs by signing a new deal that will keep him at the side until 2023.

In November 2020, Ruben de Haas became a third-generation Cheetah as he made his Super Rugby debut for the side against the Sharks. He followed his father Pieter and grandfather Gerard in playing for the Bloemfontein outfit.