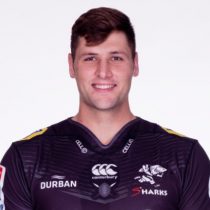 Ruan Botha made his Super Rugby debut for the Lions in 2012 before being selected for the South African U20 side that won the IRB Junior World Championship.

Botha moved to Cape Town in 2013 where he represents Western Province and the Stormers. He has proven himself valuable as a lineout specialist as well as being effective in general play.

The former Baby Bok Junior World Championship 2012 winner has been putting himself about assertively in the Sharks’ second row, and his 2.05m frame should be a vital component for the team's 2017 season.

Botha took his Super Rugby cap tally to 42 and scoring 2 tries since his debut for the Stormers against the Chiefs in 2012.

He went onto lead the Sharks to the Currie Cup final in 2012. Botha was named in the Springbok end of year tour but was unable to make his test debut.

In January Botha was named as the Sharks captain for the 2018 Super Rugby season.

In June, he signed a deal with Kubota Spears and will join the side following the conclusion of the 2018 Super Rugby season.

May 2019 saw him sign a six-month deal with London Irish, acting as Rugby World Cup cover.

Following a spell with Kubota Spears in Japan, he will then re-join London Irish for pre-season in June 2020 in preparation for the 2020/21 campaign at the club’s Brentford Community Stadium.