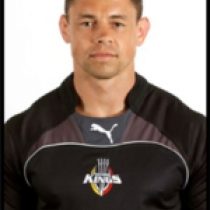 Skillful and with great vision, Cooke made his Currie debut with the Leopards in 2004. A South African U21 star the following year, the centre then graduated to Super Rugby with the Cheetahs in 2006, whilst running out for Griquas in the Currie Cup. 2008 saw a move to France, with six years at Brive and one season at Grenoble. 2013 brought Cooke back to South Africa, returning to Super Rugby with the Southern Kings.