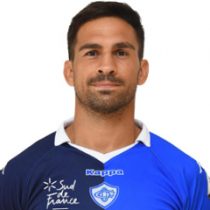 Robert Thompson Ebersohn has played for the Springbok Sevens, South Africa U20 and made his Super 14 debut for the Toyota Cheetahs in 2010.

When participating in the 15 man format of rugby, his preferred position is outside centre although he has been employed as a fullback on various occasions. His twin brother, Sias, also plays for the Cheetahs and made his Super Rugby debut in 2011.

The twins played side-by-side from school level to Super Rugby level until Sias joined Australian side the Western Force in 2013 and Robert joined Montpellier a few months later.

Robert began playing for Castres in 2016.