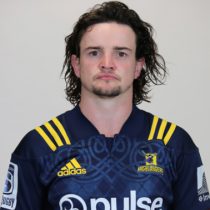 Richard Buckman AKA Barracuda has distinguished himself as one of the best utility back's in New Zealand since making his provincial debut at the age of 17.

Buckman shined in the NPC and earned his first full Super Rugby contract with the Hurricanes in 2012.

He made his Super Rugby debut against the Lions in 2011 having been included in the sides wider training group.

He left the Hurricanes after the 2013 Super Rugby season and signed with the Highlanders were he has excelled for the side playing at fullback, centre and wing.

At the end of the 2016 Super Rugby, Buckman joined Japanese side Wildknights and returned to New Zealand for the 2017 Super Rugby season.

He was also selected in the Barbarians squad for their games against Fiji and South Africa.

Buckman had an outstanding season for the Highlanders in 2017 scoring 4 tries in 12 matches and played the full 80 minutes in the Highlanders historic victory over the British and Irish Lions.

His form lead to him being called into the All Blacks wider training squad for the Rugby Championship.

He failed to make the squad but he was called into the Barbarians squad and started the match against his home nation.

Buckman currently has 45 Super Rugby caps and 11 tries to his name and will look to the 2018 Super Rugby season to push for his spot in the All Blacks squad.

Buckman missed the opening rounds of Super Rugby with an injury, in April the Highlanders confirmed that Buckman had signed a deal with Japanese side Kobe Steelers.

The move means that Buckman will be available to the Highlanders for 2019 Super Rugby season.