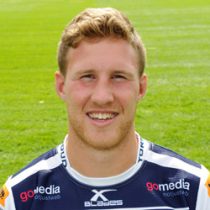 Beck made his debut for Yorkshire Carnegie in the 2009-10 season in LV= Cup game against Leicester Tigers when a young Carnegie side secured a memorable 28-17 victory and then retained his place for the following Cup game against Sale, coming on from the bench in the 24-17 defeat. He also played for Harrogate as well as Otley over the season.

In the 2010-11 season he once again joined up with Otley on loan, where he gained valuable experience, making 20 appearances. He returned to Carnegie to feature against Leicester Tigers and Sale Sharks. In 2011 Richard completed his university studies in Economics and Politics, earning a 2:1 honours degree from Leeds University.

In the 2011-12 season Richard was one of the stars of the campaign and made 28 appearances for the team and scored his first try for the club against London Scottish. He registered a further three tries over the season and his performances earned him a new two-year contract.

He made a promising start to the 2012-13 season, playing 14 times and scoring tries against Leinster A and Moseley, but a shoulder injury ruled him out for the majority of the second half of the season, before making a return to the side for the dramatic play off clash against Newcastle Falcons.

He made 17 appearances in the 2013-14 season, under new coach James Lowes and helped the team to the play offs and played in the British and Irish Cup Final against Leinster. Injuries limited his game time to just seven the following season, but he returned in 2015-16 to play a big part in Bryan Redpath's side, who made it through to the play-off semi finals where they lost out to Doncaster.

During the 2016-17 season Richard featured 20 times for Carnegie, which included the two play off finals against London Irish, when the team put in a valiant effort against an experienced Irish out but just missed out on promotion.

In the 2017-18 season, he was a mainstay of the side once again making a total of 21 appearances in all competitions under James Lowes.

In January 2019, he announced his retirement from the game on medical grounds.

In July later that year, Wasps announced that Richard Beck has joined the Club as Academy Coach ahead of the 2019/20 season.