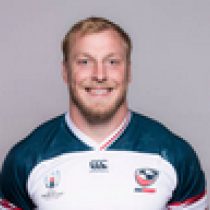 The former football standout at Pewaukee High School has become an elite-level rugby player since his graduation, part of a nationally-renown club team in Seattle and the U.S. National Team.

He took leave of absence during the NFL pursuits and signed to play for the Pro Rugby team in Denver.

In May 2017, Landry was named in the USA Men's Eagles for the Summer Series and Rugby World Cup 2019 Qualifiers in June and July 2017, finishing the tournament with 12 caps.