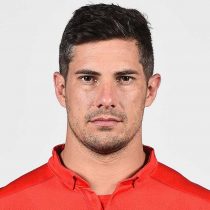 Phil Burleigh made his debut for the Highlanders in 2012 after selection from the Chiefs wider training group at the beginning of the season.

He made a sensational start to his Super Rugby season against the Crusaders in Dunedin by scoring a critical try, at a sold-out Forsyth Barr Stadium, which ensured a Highlanders win.

He brings a fast pace to the game with swift ball handling and speedy running, he is an asset to any team.

Edinburgh Rugby boosted the club's back line during summer 2014 with the signing of Highlanders stand-off/centre Burleigh.

Burleigh arrived at the conclusion of the 2014 Super Rugby season and made his debut off the bench in the win over Munster, the Guinness PRO12 2014/15 opener.

Phil has won over 50 caps for Edinburgh since his arrival on an initial two-year contract with the capital club.

In October 2017, he became one of ten uncapped players to be called into a 36-man Scotland squad for the November Tests.

Burleigh made his test debut against Australia off the bench.

Following the conclusion of the 2017/18 season, Burleigh signed a deal return to New Zealand to join Canterbury ahead of the 2018 Mitre 10 Cup season.