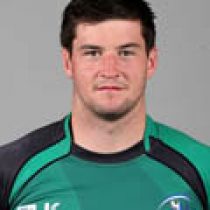 Qualter is an ex u18, u19 and u20 Irish international lock. After impressing through the youth age groups Qualter, was promoted from the Connacht Academy in 2013.

Qualter made his senior debut, while still at the academy, during an injury crisis that saw him come off the bench against Edinburgh in the 2012-13 Pro12 season.

In April 2017, Nottingham Rugby announced that Qualter will join the club for the 2017/18 season.