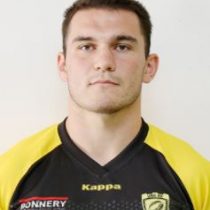 McMahon was born in Dublin and moved to Dungarvan at a young age. He started playing rugby at the age of six with Dungarvan RFC and was there until U-17s before moving to Rockwell College for fifth year.

McMahon won the Munster Schools Senior Cup that year and lost out in the final a year later.

He played two seasons of Munster Schools before progressing to U-19s and U-20s, also lining out for Munster Development, 7s and Munster A along with getting capped for Ireland at U-19 level.

A powerful and fast player, McHamon signed for French side Carcassonne in 2017.

After 20 appearances for the side, McHamon earned the confidence of the Carcassone staff and signed a new deal that will see him at the club until at least 2019.