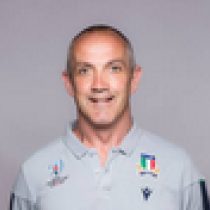 An attendee of Terenure College, he won the prestigious Leinster Senior Cup in 1991 before moving onto Lansdowne FC in Dublin. O'Shea's professional playing career spanned for 7 years, mainly at London Irish for 5 years.

After hanging up his boots he became coach of London Irish, initially starting off as a skills coach. In his 4 year spell he won the AW Cup in 2002.

O'Shea spent 5 years out of coaching, taking a role in the RFU as a Director of Regional Academies till 2008.

In 2010, Oshea was appointed Harlequins head coach and had a successful 6 year spell, leading the club to a Challenge Cup win in 2011, Aviva Premiership win in 2012 and an Anglo Welsh Cup in 2013.

His final game in charge of Quins ended in defeat in the Challenge Cup final against Montpellier.

After months of speculation, O'Shea was named the new head coach of the Italy ahead of the 2016 summer tour. In the autumn, O'Shea made history as the first ever coach to lead Italy to a win over South Africa, as the Azurri ran out 20-18 winners over the Springboks.