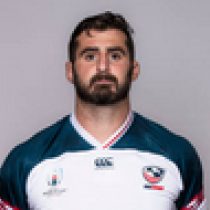 Nick Civetta started playing rugby at the age of 18 upon entering the University of Notre Dame in Indiana, USA. He was named to the USA Rugby Collegiate All American team in 2010 and 2011.

Civetta represented the USA at the senior level, appearing three times with USA "A" in 2012. He played his club rugby in the US Super League with San Francisco Golden Gate RFC and New York Athletic Club.

His professional career started in 2013 with S.S. Lazio 1927 in the Italian Eccellenza competition.

Civetta started 19 of 20 league fixtures in his debut season. In 2014, Civetta moved up from Lazio to Rugby Viadana, an Eccellenza team that appears perennially in the playoffs.

In 2016, he signed with the Newcastle Falcons of the Premiership. Civetta made his Men's Eagles debut in an uncapped match against the Maori All Blacks in Chicago. He earned his first cap as an Eagle one week later against Romania.

He has since made 4 Test appearances for USA representing his country in the Americas Rugby Championship, World Cup Qualifiers and November Tests.

In June 2018, Civetta signed a one year-deal with Doncaster Knights from Premiership side Newcastle Falcons, where he made five appearances.