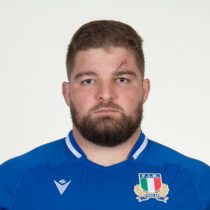 Ceccarelli started his career with Rome-based Lazio Rugby Club before securing a move to French side La Rochelle in 2012.

Following a brief spell with Federal 2 team AS Macon, the prop returned to his native Italy to sign for PRO14 outfit Zebre in 2015.

In two seasons at the Stadio Sergio Lanfranchi Ceccar, Ceccarelli made 46 appearances before moving to current club Oyonnax at the start of the current season.

He made his Test debut against Ireland in the 2016 Six Nations and featured against Scotland during the Azzuri’s 34-15 Summer Test defeat in Singapore in June.

Ahead of the 2020 Six Nations he earned a national recall.